Since Spring Fair, I have made a few pots but since the next show is in August, there is no rush to finish anything. I've been cleaning and re organizing. I've sold off a few things that were taking up too much space, broken bad pots, had a seconds sale and it has had some effect in opening up the shop. I may even have made enough space for a photo booth! I'll let you know how that comes out. This week, I've been screwing around making some larger pots. These are about 16" each. I know how to make bigger ones but they get to be a real pain to carry around to shows and these are big enough to be corner pieces while being small enough they might actually sell. 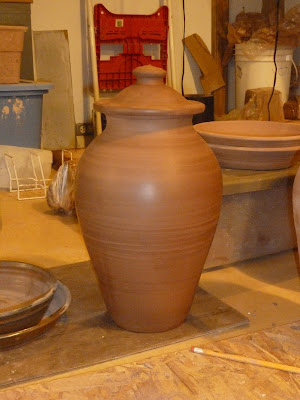 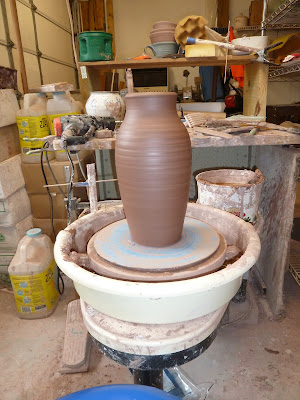 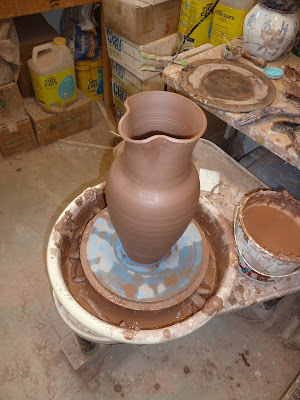 In other news, fellow Balladeer John Giver is in hospice care. I guess he had written some songs that Christine Lavin ( Sensitive New Age Guys, Four Bitchin' Babes, etc)  had recorded and they had become friends. She came to town last weekend to pay her respects and give a somewhat impromptu concert in his honor. Turns out she is about my age. I had expected her to be 30 years younger and when she started to sing, she was. She put on a great little show for about 100 people and we all had a good time. One of the openers was Lenny Hall and his wife Linda singing the old Billy Joe Shaver song " I'm Gonna Live Forever" It was a perfect song for the occasion and Lenny does it much better than I do but in case you don't know it, here is my version.

Comments are the currency of the Blogosphere. Remember to tip your waiter.

Where to find Whistle Creek Pottery

May 2, 2015 Spring Fair at Desales Corner (Madison and Woodburn) Cincinnati

Note- Most of these are small towns. It would be hard not to find the Festival once you get to town so I'm not including directions.

Whistle Creek is near the area where my ancestors settled in East Tennessee. It is about 6 miles west of I-75 and 8 miles south of Jellico.At various times the land was claimed by England, France, Spain, Virginia, North Carolina, Kentucky,Tennessee, the Union,the Confederacy, and the Cherokee.My family was there around 1800 and possibly before.My brothers and I still own the top of the mountain and it is still very rough country. I named my studio Whistle Creek in memory of the Allens who scraped their living from the earth and managed to keep it for two hundred years.

On the first Saturday in May, I will be part of the Cincinnati Clay Alliance's annual Spring Pottery Fair.We will have nearly 60 of the finest potters in the region showing their wares. The show is at DeSales Corner (Madison and Woodburn) in East Walnut Hills from 11 to 5. Lots of free parking, music, pottery demos, and fun fun fun.

I have started a new business to augment my pottery income. Worry Free for a Modest Fee. Just jot down your worries on a 3x5 card and send them on to me with a check for $25. I will do your worrying for you and you can live that care free life you have always dreamed of! Now that's a bargain but for $500 I'll let you open your own franchise.

Ok Folks, sign up so I know I'm not just searching for intelligent life in space.

I went into my "settings page" today and discovered that some of you were restricted from making comments unless you had certain Google accounts. I love comments so I fixed that. Comment away!

Re: the tip from the last post about using wax resist to slow drying in areas of attachment.Worked like a charm.I think it will be part of my routine when I attach handles or spouts.That's one more I owe Jean Ann (and it's a long list.)

As I was rushing to get pots to dry in time for Monday's bisque firing, Jean Ann reminded me of a trick. I had put handles on some soup bowls but if I covered them to dry slowly, I couldn't fire them Monday. If I left them uncovered, the handles might crack away from the body of the bowl. She said to paint some wax resist around the area of the attachment to slow the moisture loss in that area. All should be well but I'll know for sure Monday. 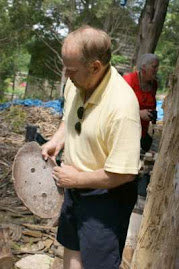 My friend Ed with his first pot.

Thanks to all of you who have visited the booth at local shows or visited the Blog from afar. Your support and encouragement are very much appreciated. 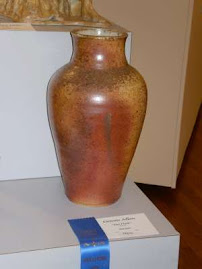 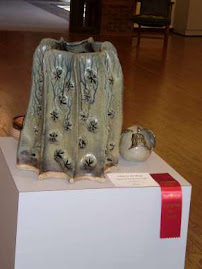 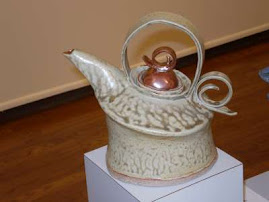 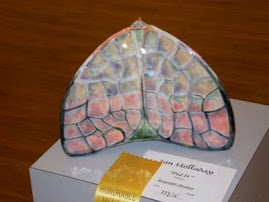 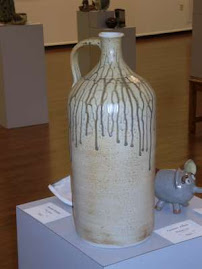 Thrown in 3 parts and assembled 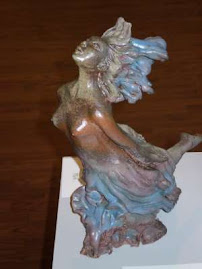 Yes it's been wet 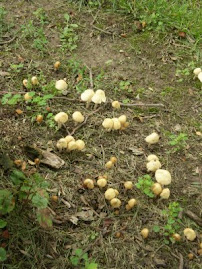 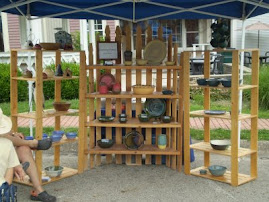 Words to Live By

Sleep late, start slow, quit early. Maybe this is not the best business model for quick success but when you;re retired it seems to work.

If you have purchased Whistle Creek Pots at past shows or are signed in as a follower of this blog you are eligible to receive a 10% discount on future purchases. Just remind me by saying "I'm a prior buyer"

Thanks for your support,
Dennis

Thought of the Day

Just say no to negativity.

I have two loads of kiln brick at home and one more to go. Weather permitting I will get some help from my newly retired brother and haul the rest home next week. I'm still early in the planning stages for the kiln. I haven't decided yet whether to make the firebox perpendicular to the arch a la John Theis managama and groundhog kilns or to place it parallel to the axis of the arch. I do know that with #2 three inch arch brick It will be a 3"6" sprung arch on top of low walls with a sunken firebox. If i can find a saw that will cut 41/2" I can rip some of the arch brick to fill in the ends of the courses and use the arch brick on edge to make 9" thick walls. Any input appreciated.

The Pitcher and the Nun

Yesterday a couple of sweet elderly ladies came into my booth and fell in love with the pitcher from the last woodfiring. (See last Blog entry) They said they wanted to give it as a wedding gift, then they said the fatal words-" Do you take Mastercard? " I replied-" No, but I want this piece to go to a good home and I believe that if I send it home with you, you will send me a check." They agreed and we exchanged info. It turned out they were nuns.Instead of mailing me a check, they brought back a check and some homemade candy a couple of hours later.It was nice to make the sale, but even nicer to send out a little faith in mankind and have a good deed returned. 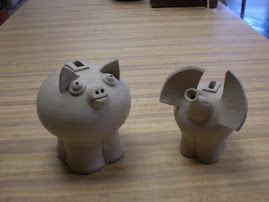 These will be done in a couple of weeks but not in time for Waynesville next Sunday.

5-2-09 Springfair at Madison and Woodburn in Cincinnati.


May through Sept Second Sunday Stroll in Waynesville, Ohio. 12 to 4 the second Sunday of each month.

7-11-09 Bellevue, Ky Second Saturday. Bellevue features a different Arts group each month in the summer.Potters from the Clay Alliance will be there in July. 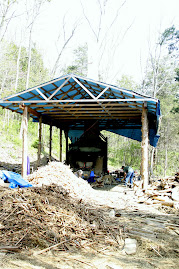 Who are they talking about?

Chrysler is offering employee pricing on their new vehicles. They barely have any employees left, their pay and benefits have been cut and they are scared to death to buy a new car.I don't think I would refer to them in a marketing campaign. I am sorry for their plight and I wish them well but I don't think identifying with them will put people in a mood to buy cars from a failing brand.

Gary and Pam Adkins mine Ohio Slip on their farm near Bethel, Ohio. She's Mom, he's Pop and there you have it, a real Mom and Pop business.Gary digs the clay with a backhoe, cleans and dries it with homebuilt equipment and sells it direct from the farm. It is a very versatile slip and glaze ingredient at a wide range of temps.It is very similar to the old Albany slip but is not sold as a direct replacement. As always in glaze making, your results may vary. Check out the web site at akclay.com

Today was spent loading a bisque kiln with pots I have been throwing the last few weeks.They are made with a really nice red clay that a friend sold me when I couldn't get earthen red at Highwater. I should be able to glaze Monday and fire the whole load again next week. This is the only clay that I fire in the electric kilns but it gives a look that a lot of people like and I can fire economically. This plus pots on hand and pots I have been glazing for the gas kiln should be plenty for spring fair so now I can concentrate on the booth.

The main project of the week was to try to finish throwing a batch of red clay that I have been working on so I can get the pots fired and glazed for the big Spring Fair sale that the Clay Alliance is holding on May 2. This is the big annual sales event for the club and I am very happly to be included this year but I do feel a little pressure to up my game and have a booth that doesn't look like a yard sale. Once I get the pots fired, I will have to spend some time focusing on display space and building some nice shelving. The sale is 11 to 4 at the corner of Madison and Woodburn ( DeSales Corner) Just take 71 to Edwards rd., Edwards to Madison, Right on Madison and you will be there in a few minutes. You will have a great time and get to meet 40 of the best potters and ceramicists in the region. More info at http://www.clayalliance.org/. 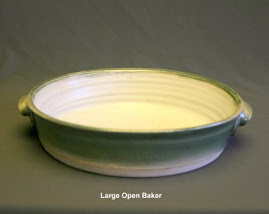 This pot is Oribe green on the outside with a nice white liner inside. The spots are from iron in the clay that is pulled to the surface by firing in an oxygen starved atmosphere.It's food safe and oven ready 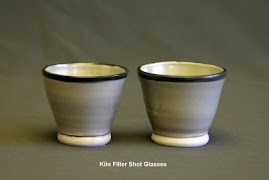 Kiln fillers are tiny little pots that tuck into spots that would otherwise be empty.This helps your kiln fire better and it makes use of heat that you have already paid for. **************************

This coming weekend is the Sarah Culbreth workshop out at Maplecreek. I don't know if there is space available but this is a great chance to improve your potting skills and have fun at the same time. 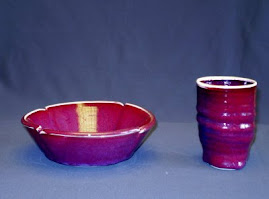 After the kiln opening, I went to a studio sale that Mike Baum and Laura Davis were holding.Mikes sales are always lots of fun, like a party but with pots for sale.Food, drink ,door prizes, live music. Very well done.I won this lovely bowl and bought the tumbler by Laura Davis.The red color is difficult to fire successfully and I am very happy to have these two pieces. 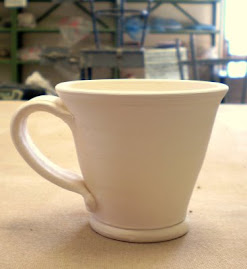 I'm trying out some new styles like this tiny expresso cup 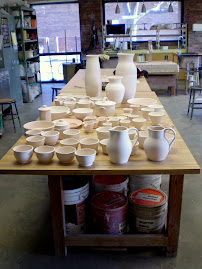 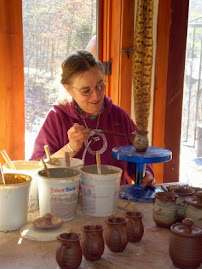 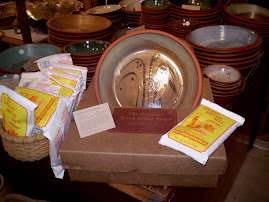 Why say it if they don't mean it?

Last week I went to the bookstore. Naturally I had some coffee and a trip to the restroom. A sign in the restroom said "Employees must wash hands" I waited 20 minutes to no avail and finally went ahead and did it myself. I hope they're not mad. 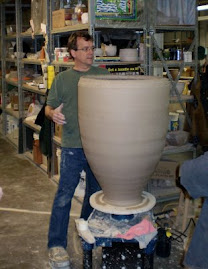 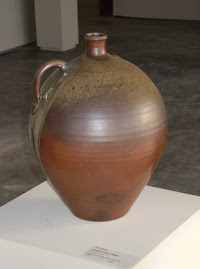 This is a huge jug and extremely light. Chris did a wonderful job on this one. 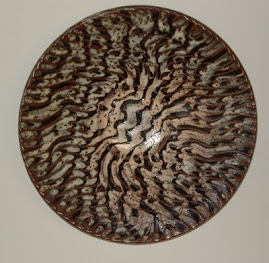 My friend Mike Baum was one of the presenters. He showed this fabulous platter in the gallery. 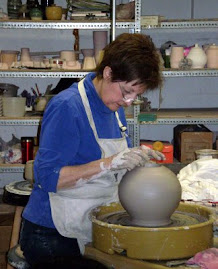 Here Laura demonstrates how she makes a teapot body.

My Dad on the right about 1920. The other half of the kids were grown and gone.